You are here: Home » Books » Balzac in Brazil 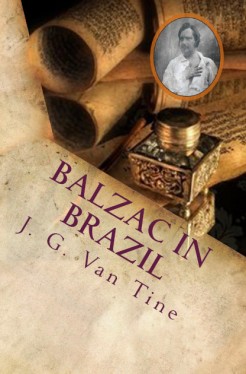 In post-revolutionary France of the early 1830’s, the elite combats dissent and opposition through a network of censors, informers and unofficial deputies. As modes of surveillance, the police also set up businesses, including brothels, publishers, cabarets and a clearing house for stolen paintings, enterprises that affect not only the targeted population but entertainers, actors and authors, among them Balzac and Henri Beyle (pen name Stendhal). Apart from risking arrest while his family’s fortunes are sinking, Balzac pursues wealth through enterprises that increase his debts, one being his collection of paintings. Predictably, many transactions are scrutinized by the police, who recruit young people in and around the arts, few of whom know what ends they serve, but the game, seemingly hedged by legal and bureaucratic safeguards, takes unexpected turns.

J. G. Van Tine is the author of Bloodball, The Culture Contract and The Forbidden Self, the latter exploring conflicts between literature and science in Swift, Dostoyevsky, Nietzsche, Freud and other major writers. His works for the theater include Broken Toys, Count Tolstoy, Assassination Games, The Trial of Doctor Reich and H. Melville, Whaler.